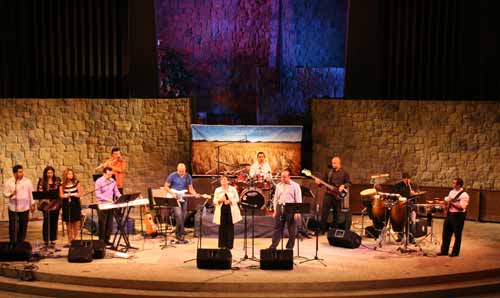 Many years ago missionaries brought Western hymns to Iran that were translated into Farsi for the church to use. As the Gospel began to spread in Iran, the Lord used gifted Iranian Christians such as Haik Hovsepian and Vruir Avanessian to create worshipful music for the believers.

In recent years God has raised up a new generation of very talented young Iranian musicians to enrich the life of the church by writing brand new music that glorifies Christ and by performing and recording it excellently.

One of the Iranian church's most talented musicians is Haik Hovsepian’s son Gilbert who has recorded a number of music CDs and recorded programs for television and radio, including our Radio Mojdeh broadcasts. He and his two brothers have also created a special website for house churches in Iran called “Khaneye Parastesh” (House of Worship). In one easy-to-navigate site Christians in Iran can find recordings of 223 worship songs, lead charts for guitars, and Farsi lyrics for each song..

One of these songs is called "Az Aseman Beriz" (Pour Out from Heaven). It is a simple prayer.  Click here to listen to Gilbert singing this beautiful worship song.

Believers inside Iran sometimes may have to sing quietly to escape detection, but they sing with heartfelt fervor and commitment to the Lord Jesus. They are encouraged to do this by the musical talents of Gilbert and a number of other Iranian musicians who are devoted followers of Jesus Christ.