Happy NoRuz to our Iranian friends.

Everyone looks forward to Spring. However, the first day of Spring probably has more meaning for Iranians because it is also the beginning of the Iranian New Year.

NoRuz ("new day") is the most important holiday of the year in Iran. Also celebrated in Afghanistan, Turkey and Central Asia, this celebration is rooted in 25 centuries of tradition. 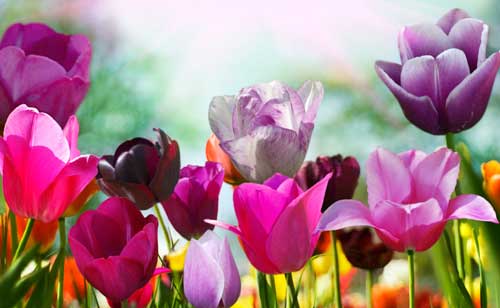 The festivities begin about two weeks before NoRuz when families clean their houses (called "Khaneh Tekani" which means "shake up the house"). They also buy new clothes. Traditional greens—usually wheat or lentils—are sprouted in a dish to represent growth and renewal. The minstrel, "Haji Firuz," roams the streets and alleys.  His face is blackened and he wears a multicolored coat covered with bells. He entertains with music and dancing in exchange for a few coins.

The last Wednesday of the old year is called "Chaharshanbeh Souri". In the evening, young and old jump over burning piles of brush while asking the fire to take away all that is old and to replace it with the fire's brightness. This practice, like many NoRuz traditions, is rooted in the ancient Zoroastrian religion.

On the eve of NoRuz, the entire family gathers around a special table called "Haft Seen" to wait for the coming of the new year. The "Haft Seen" is like the Christmas tree of NoRuz. Seven items beginning with the letter "s" are spread on the table. The items are usually "sekeh" (coin), "sabzi" (green vegetables), "sonobol" (hyacinth), "samanu" (a dish made of flour, sugar and coloring), "senjed" (a dried fruit), "seer" (garlic) and "serkeh" (vinegar). Families usually place a bowl of water with goldfish, a mirror, eggs, milk, cheese, yogurt and candles on the Haft Seen table. They eat sweet pastries during this special evening to ensure that they will have a sweet instead of a bitter new year.

Special NoRuz foods are traditional during the days of celebration. "Sabzi Polo Mahi" is rice and herbs with smoked fish. "Baklava" is a favorite dessert.

NoRuz day itself marks the beginning of thirteen days of celebration and visits. Gifts are exchanged and mountains of pastries and fruit are consumed. The eldest is visited first as a sign of respect followed by visits to the other relatives, neighbors and friends.

The NoRuz celebration ends on the 13th day called "Sizdah Bedar." On this day, they commonly leave their homes and go on picnics in parks and the surrounding countryside. They take the greens that they have sprouted and leave them outside of town.

The new year has begun.