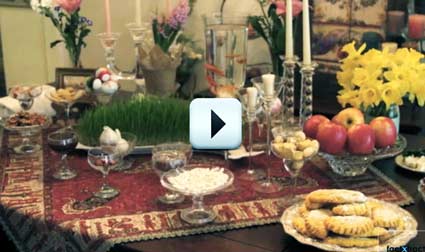 NoRuz is the beginning of the Iranian New Year and the happiest time of the year for Iranians. This year NoRuz falls on March 20.

This important holiday has been celebrated for more than 3,000 years in Iran as well as in other Middle Eastern and Central Asian countries.

The word "NoRuz" is a Persian compound word, consisting of two words: "No" meaning "new" and Ruz meaning "day." NoRuz signifies the beginning of the new year. There is little agreement on the correct spelling of NoRuz and numerous variations exist, including Nowruz, Norooz, Nouruz, Norouz, Narooz, Nauruz, Nawroz.

As their most important national holiday, typical Iranian families usually prepare for Nowruz well in advance. They clean their houses and buy new clothes.  Traditional greens—usually wheat or lentils—are sprouted in a dish to represent growth and renewal. A minstrel, "Haji Firooz," roams the streets and alleys. His face is blackened, and he wears a multicolored coat covered with bells. He entertains with music and dancing in exchange for a few coins.

On the eve of NoRuz, the entire family gathers around a special table called "Haft Seen" to wait for the coming of the new year. The "Haft Seen" is like the Christmas tree of Norooz. Seven items beginning with the letter "s" are spread on the table.

Families and friends visit one another during the two weeks of celebrating. The eldest is visited first as a sign of respect followed by visits to the other relatives, neighbors and friends. Gifts are exchanged, and they eat pastries, fruit and nuts and drink steaming cups of tea.

On the 13th day called "Sizdah Bedar," people leave their homes and go on picnics in parks and the surrounding countryside. They take greens that they have sprouted in their homes and leave them outside of town.

Watch this video for a simple explanation of the interesting customs of Nowruz.