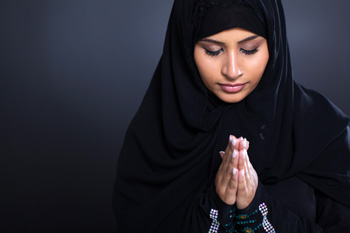 Ramadan started on April 24, and continues until May 23.  What is Ramadan?  Why do Muslims observe this annual fast and what do they expect to gain from it?  This helpful article by Dale Fagerland answers these and other questions.

Salifou shuffles through the deserted streets of his village in the dead of night echoing over and over the summons, “Get up, O faithful believers!  Arise, for this is the blessed fast of Ramadan.  Get out of bed and cook, eat and pray – for prayer is better than sleep.”

The 3:00 a.m. ‘caller’ implores the faithful, shouting through his tattered megaphone, “Eat and drink now before the sun comes up.  Dine and drink now, then exercise discipline and self-control during daylight hours.  Purify yourselves through self-restraint and good deeds.  This is the blessed fast of Ramadan.”

Ramadan is intended to be one of the most sacred and spiritually renewing of all Islamic practices.  This month-long fasting ritual takes place during the ninth month of the Islamic calendar.  All Muslims are mandated to abstain from such pleasures and necessities as food, drinking, smoking and even marital sex during daylight hours.

Ramadan is the month in which Islamic tradition states that God began to reveal the Qur’an to the prophet Muhammad through the angel Gabriel.  Participating Muslims are not to eat or drink anything from dawn until after sunset.  While voluntary fasting is recommended for Muslims at other times, it becomes obligatory during Ramadan.  In some strict Islamic nations, publicly breaking of the fast is a criminal offense punishable by a prison term.

Eating or drinking unintentionally is forgivable, but the transgressor is expected to fast one additional day to make up for each day of lapse.  Where Muslims are a small minority, there is less pressure to adhere strictly to the prohibitions.

Travelers may postpone fasting so no undue hardship is experienced.  Exempt from fasting are the elderly, seriously ill, and insane, as well as small children, nursing mothers and pregnant women.

The Qur’an commands the practice of the fast of Ramadan, “O ye who believe!  Fasting is prescribed for you as it was prescribed to those before you [Christians], that he may (learn) self-restraint . . . fast till the night appears . . . ” (Surah 2:183-187).

The much-anticipated start of the month is based on a combination of physical sightings of the new moon and astronomical calculations.  The practice varies from place to place, some relying heavily on sighting reports and others totally on calculations.  The Qur’an and Hadith indicate the precise moment of the fast each evening is to begin when one cannot distinguish the difference between a white and a black thread.

The Islamic lunar calendar is usually 11 days shorter than the Gregorian calendar, so Ramadan migrates closer throughout the seasons.  Thus, since Ramadan is expected to be July 9 – August 7, 2013, next year it will begin June 28.  The entire cycle takes around 35 years.

Such a stringent exercise of abstinence requires great discipline.  Very early in the day the body craves liquids, especially in extreme climates.  Praying five times each day and keeping the fast are mental, physical and spiritual disciplines that test one’s endurance.  Many devout Muslims go beyond the demands of the law and refrain from even swallowing their saliva while fasting.

Orthodox Muslims explain that to fast is to hold back, to refrain from, or to abstain.  These limitations are imposed in order to rise beyond or move past former limits.  Devout followers believe that God will bestow spiritual and material blessings upon those who seek the fast with sincerity and knowledge.

Moderate Muslims equate the fast of Ramadan with jihad, the Arabic word for “struggle.”  Many claim that this rigorous spiritual struggle of discipline, submission and resisting temptations is jihad akbar or “the greatest struggle.”  Muslims believe that abstaining from the necessities and pleasure of life during Ramadan represents a moral struggle to attain a higher spirituality.

During Ramadan, every part of the body is to be restrained.  The tongue must be kept in check from backbiting and gossip, and the eyes must restrain themselves from looking at unlawful things.  The hand must not touch or take anything that does not belong to it; the ears must refrain from listening to idle talk or obscene words.  The feet must be curbed from going to sinful places.  To control the love of comfort, hunger and sex is to behave as Allah’s servant.

However, reality reveals quite different results since human nature tends to be more irritable and short-tempered when deprived of food and drink.  There is often more anger and quarreling during Ramadan than at other times of the year.

Extremists use this “holy” month to ramp up their radical activities.  Widespread participation in the fast usually results in the pace of life slowing and productivity decreasing.  Emotions run high, absenteeism increases, and government offices, schools and businesses have shorter work days.

Many Muslims consider the fast of Ramadan as a kind of tune-up for their spiritual lives.  Muslims believe they will receive special Baraka (blessings) from God throughout the year if they read the entire Qur’an during Ramadan.  Others will spend part of their day listening to the recitation of the Qur’an in a mosque.

Keeping the fast of Ramadan is supposed to foster appreciation for the blessings of God, which man is so apt to take for granted in the midst of plenty.  The aim of abstinence is to instill in man a spirit of gratitude and devotion to God, causing the Muslim to be deeply conscious of the discomfort suffered by the less privileged.  Identifying with the poor is supposed to result in a spirit of sympathy leading to charity toward the less fortunate.

Our Muslim friends take great pride and satisfaction in belonging to the ummah – the worldwide Islamic community.  This camaraderie finds its highest expression in the dual rituals of the annual pilgrimage to Mecca and the annual fast of Ramadan.  There is great pressure on Muslims to conform to the demands of ritual, and many nominal Muslims feel pressured to participate in the month-long fast.

Time of forgiveness and rewards

Numerous Hadith indicate that keeping the fast of Ramadan and saying prayers faithfully will result in the forgiveness of past sins.  However, Islamic theology teaches that more than fasting is involved in the forgiveness of all past sins.  Islam presents a wide range of legalistic works that must be accomplished in order to have one’s sins forgiven.  Fasting is only one of these works – even then our Muslim friends make absolutely no claim that all their good works will make them acceptable to God on Judgment Day.

For Muslims, the “Night of Power (Lailat al-Qadr) is considered the holiest night of the year.  It is the night in which Muslims believe Muhammad received his first revelation from God through the angel Gabriel.

Although there are different traditions regarding the exact night, most regard the Night of Power to be the 27th of Ramadan.  Because they believe this is a sacred night in which God sends out thousands of angels to bestow favors on the faithful, Muslims often spend the entire night in lengthy prayers.  During the last 10 days of Ramadan, some men seclude themselves in the mosque in spiritual retreat and vigil.

The end of Ramadan is marked by a three-day celebration involving visiting family and friends, gift-exchanging, singing and feasting, and celebrating the conclusion of the fasting period.

In many countries, Muslims break the fast by eating a few dates, as the prophet Muhammad was known to do.  This is followed by the sunset prayer and dinner.  Ramadan emphasizes community, and since everyone eats dinner at the same time, Muslims often invite one another to share in the Ramadan evening meal.  It usually involves three full days of dressing up, visiting family and friends, gift-exchanging, singing, feasting and celebrating the conclusion of Ramadan.  Muslims around the world prepare their favorite foods and sometimes share their hospitality with Christians.

How desperately Muslims are striving to gain forgiveness of sins and favor with God through self-denial and good works.  The good news to Muslims is that by simple faith in Jesus they can be forgiven by God.  Just as Salifou walks the streets of his Muslim village calling, “Arise, be victorious and receive forgiveness of sins . . . Arise and conquer the darkness of your soul,” may we as followers of Jesus announce to Muslims everywhere the resurrection power of Jesus to truly conquer the darkness of the soul.

This article first appeared in the September/October 2009 issue of Intercede, a bimonthly publication of Global Initiative:  Reaching Muslim Peoples.  Reprinted by permission.  Visit their website.