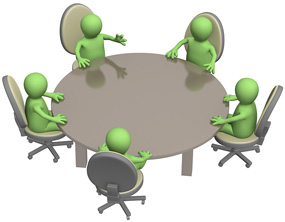 Two-thirds of the population of Iran is under 30 years of age. Iranian young people are well-educated, tech-savvy, and vitally interested in the issues facing the entire world, not just Iran. They have strong opinions and want to express themselves openly.

Recently the political situation in Iran has been on the forefront of everyone’s mind. Although the youth of Iran are proud to be Iranians, many of them are critical of the current government.

We produce and air many programs specifically for young people. One of our producers has been working on a series that has really caught on – "Mize-Gerd" or “Round Table.”

This is an exciting series of discussions by Iranian Christian young people on topics of current interest to them. The programs are 30 minutes long. They are well done and relevant to issues facing the youth of Iran.

After the panel discussion among young people, a moderator brings in a Biblical perspective at the end. The topics include decision-making, joy, hope, repentance, loneliness, and learning during dark times.

Pray that we will be able to fund more of these programs and keep this great series going.  And pray for our production team to be able to handle all the work.