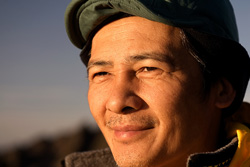 Our production team thoroughly enjoys working on the Unshackled! drama programs.  Preparing the scripts, recording, editing, mixing, selecting music and sound effects – the producers are excited about this work.

One two-part Unshackled! program has especially gripped them. This true story describes the persecuted church in China and resonates in a deep way with many Iranians who listen to the broadcasts.  Even Iranians who are not religious are aware of what is happening to Christians inside their country and few are proud of their government’s actions.

This particular Unshackled! program is the true life story of Peter Lee, a young Chinese man who became a Christian as a teenager in China and began leading his friends to Christ. During a meeting of the underground church where he fellowshipped as a college student, the authorities burst in on the worship service and arrested him. Peter went through very difficult times in prison but stood firm in his faith in Jesus Christ.

This dramatic story will strike a deep chord in the hearts of Iranians inside the country.  The Scripture passages used in the program rivet the listeners on the purposes of God in allowing His children to be persecuted and how the Lord sustains their faith. We believe the Iranians who hear these broadcasts will recognize the similarities between the state of the church in China and the church in Iran.

Pray that many non-Christians and Christians alike will hear these radio dramas and be drawn to the Person of Christ. Pray that the Lord will supply the funding for continuing to produce and air these fascinating programs.

And may we all prepare ourselves for what may lie ahead for the church in the West.