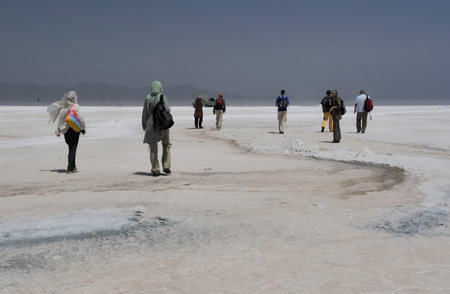 Lake Urmia is a salt lake in northwestern Iran, between the provinces of East Azerbaijan and West Azerbaijan. It was once twice as large as Luxembourg, the largest lake in the Middle East, and the sixth-largest saltwater lake in the world.

Sadly, the lake has shrunk to 10% of its former size due partly to climate but especially because rivers that flow into it have been dammed and groundwater pumped from the surrounding area. It once attrached migratory birds along with many tourists, some whom believed in its healing properties. But no longer.

In most places, all that can be seen are beached boats and piers surrounded by a barren, salt desert. Check this article and the map that shows the dramatic progression of the shrinkage and this article that highlights some of the reasons why the lake has been drying up.

Time will tell whether the lake will recover or disappear completely.