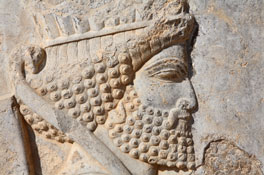 The term "Persians" refers to people who speak Persian as their mother tongue or who trace their ethnicity to the ancient Indo-European people called the Aryans who moved south from Central Asia around 1200 BC. The ancient Persians settled in what is now Iran and spread their language and culture from there.

Iran and the Iranian people are frequently mentioned in the Bible.  Four of the most important kings of Persia - Cyrus, Darius, Khashayarshah and Ardashir - are mentioned a number of times in the Old Testament.  Iran, known as Persia in the Bible, is the land of the famous Bible people Esther and Daniel.  The Bible also tells us that Persia was the nation God used to carry out His will and deliver the Jewish people from Babylonian captivity.  King Cyrus, Persia’s first monarch, was the king who allowed the Jews to return to Jerusalem.  His name, life and deeds were foretold by the prophet Isaiah 150 years before His birth.

To learn more about how the Persians factored into biblical history, see the helpful book "Persians in the Bible."