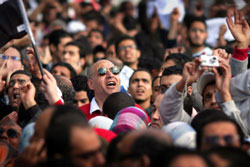 By Fouad Masri, Director of the Crescent Project. Although his comments apply directly to Arab countries, similar forces are at work in the hearts of people in Iran.

I hope you are watching all that is going on in the Muslim world. God is on the move. Muslims are tired of oppression and many are seeking freedom.

It is clear that Islam has failed as a political and a social system. There are revolutions and demands for change in many Muslim countries, including Egypt, Tunisia, Libya, Lebanon, Yemen, Bahrain, Iran and more. If it were just in one or two countries, I agree it would be a local issue. But it’s not. The entire Islamic world is in unrest, and the people losing the most sleep are the ones in charge.

There are three reasons I say this is a revolution against Islam, not just against government.

One, the people are tired of ruthless, self-important rulers. Yet, this is the core nature of Islamic rule and politics dating back to the beginning with Muhammad. Islam demands a strong ruler to keep the population under control.

It has often been said that power corrupts and absolute power corrupts absolutely. This has never been more evident than in the Islamic world. At last, Muslims around the world are realizing there is a better way.

Two, unemployment is rampant in most of these countries and the people want something done about it. This is perhaps one of the most cited reasons for the unrest, yet few look into the cause of the poor economy.

Muslims tend to have a well-developed sense of fate (a core Islamic belief), and therefore often simply accept their poor conditions as the will of Allah. Perhaps true, but many are now seeing that the wealth and corruption of the Islamic leadership is repugnant when millions live in squalor and are simply told to accept it.

Three, many Muslims have seen and tasted freedom for the first time. With access to the Internet, millions of Muslims around the world are being exposed to new ideas – including an understanding of freedom.

Under Islam, there is no freedom. Every behavior and every thought is to be controlled by Islam. Today, many people are seeing the beauty of freedom and want to experience it for themselves.

There is a major wave of awakening on the social level. I ask that you look beyond the headlines and see the spiritual dilemma Muslims are in. They need a savior, and He is responding. I know of a Shiite who prayed and committed his life to Christ recently. I know of another Muslim who came to faith in the Middle East. Yet another is exploring the New Testament.

There is a new spiritual hunger in the Muslim world, and we need to pray for Muslims everywhere to meet authentic Christians and hear the Good News of Christ.

Whether freedom wins, or not, we need to pray for Muslims to hear the Gospel. We need to take action and get involved in this timely work. We need to share the hope of Jesus with Muslims.

Global Initiative: Reaching Muslim Peoples (www.globalinitiativeinfo.com) is a facilitating ministry, endeavoring to enlist believers as intercessors, and to encourage an understanding of Islam. Their bi-monthly publication, Intercede, provides helpful information about Muslims around the world. Reprinted by permission from the May/June 2011 issue of Intercede.