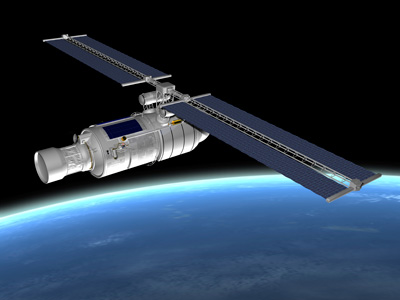 Millions of Iranians use satellite dishes to receive television programs. Mixed in with the television channels are Persian-language radio channels that can be heard on the same equipment.

Our Radio Mojdeh ("good news radio") service is broadcast 24/7 to Iran and surrounding countries from three different satellites. The broadcast footprints are very large. Those who live in this area are able to tune in to the satellite broadcasts.

We hear regularly from listeners whose lives have been impacted by these satellite broadcasts.

The first person who reported to us that he had been listening to the satellite broadcasts was one of our regular contacts. He cannot attend church, but he listens to God's Word via satellite.

One house church leader says they get their spiritual nourishment from the satellite programming. He writes, “I listen to the broadcasts 10–12 hours a day. This is even better than TV!”

Another listener heard the satellite broadcasts in Tehran. He wrote, “I recently finished my military draft service. Before I came to know the Lord, I was a religious and practicing Sunni Muslim. I read the Koran a lot, and in my prayers repeated God’s blessed name. But I didn’t know which God I was talking to. I wept from the depths of my heart and pleaded with God to show me the truth. A few days later I turned on the satellite and found the programs. At first I thought you were like the religious leaders here in Iran, spouting out slogans. But when I listened carefully to you, I was really blessed to hear the Gospel and to hear about the only way of salvation. I confess that I am a sinner. In fact, I was deep in sin. How I thank God that Jesus, on the cross, took all our sins, sorrows and pain on Himself. He was crucified without opening His mouth to complain in any way. I have since put my trust in the Lord Jesus Christ and was saved.”

Not too many years ago, we never dreamed that satellite technology would be available to us and that there would be this much fruit. But God has opened the door to use this wonderful tool. And He is using it to open the hearts of Iranians to the wonderful message of Christ.