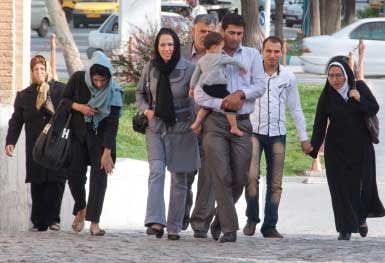 I clearly remember the excitement and the sense that something very special was happening. My wife and I had returned to Tehran in 1979 just five months after the Shah left, and a few months after the Ayatollah Khomeini had come. We felt God was bringing about great spiritual changes in Iran.

It is my joy and privilege to be immersed in the Persian church today and to see the wonderful work that God is doing. I want to tell about three wonderful things God is doing among Iranians.

God is using His Word

The first wonderful work of God in Iran is that He is faithfully keeping His promise that His Word will not return void. Isaiah 55:11 says, “It will not return to Me empty, but will accomplish what I desire and achieve the purpose for which I send it.”

I want to celebrate the faithfulness of Henry Martyn who in the early 1800s went and translated the Bible into Persian. I want to acknowledge a man like Dr. William Miller who for forty years trained Iranian evangelists, and the Word of God was spread from village to village in Iran.

I want to rejoice with the work of Voice of Christ Media Ministries where the seed of the Gospel is being planted in Iran through the radio and Internet.

One summer I was leading a team in Baku, Azerbaijan, just north of Iran. We met Iranians on the street and began to explain the Gospel to them. They said, “Oh, we know that.  We heard it on the radio.”

It is delightful when you go to present the Gospel and find that it has already been authenticated as a message that they have heard on the radio.

Brother Hossein (not his real name) was the last pastor in a major northeastern city in Iran. He said that he once went to a village outside the city to do evangelistic work. As he would give tracts to people, they would tear them into shreds and throw them at his feet. They would curse, and some would spit at him.

After doing this for many weeks, he decided he could not take it any longer. He took all of his tracts and tore them up and threw them into the “jube,” the gutter beside the street.

He did not know that in the lower part of town there was a twelve-year old girl whose mother was a drug addict. The girl had been born a drug addict. She and her mother lived in the shambles of a little tin city.

That day she was squatting by the jube, washing the family dishes in the gutter water, and her heart was filled with anger at God. She said to God, “What sin have I committed that I should be born as a drug addict because my mother was a drug addict? God, if you really care about me, and you really know me, there must be some way that you can save me and provide answers for my life.”

At that very moment a piece of paper came drifting down the gutter. She reached to get it and saw that it was a torn tract. On one side was the verse, “Come unto me all you that labor and are heavy laden and I will give you rest.”

On the other side was the address and phone number of a church in Tehran. She called the number and talked to brother Haik Hovsepian in Tehran. Haik called Hossein and said, “You have your first convert.”

Hossein said, “I had given up and lost hope, but the Word of God was faithful.”

So let us rejoice that fruit is coming after all the efforts that have gone into sowing the Word of God in Iran. This is one of the wonderful works of God.

Another wonderful work of God in Iran is that He is pouring out His Spirit in a most unusual way. I believe the time has come when God is laying bare His holy arm and showing His power to the Iranian people.

One year I spent a week ministering among the Persian population in Sweden. Tens of thousands of Iranians live in Sweden, and the harvest there is plentiful, but the laborers are few. I lived with an Iranian family during that week, and I saw many amazing things.

I met Samuel, an Iranian young man who told me that the largest church in Sweden has a home group that is made up of Iranians who have come to Christ in the Swedish language. If that's not a miracle, I don't know what is!

Samuel was leading this small group. I asked him, “How did you become a Christian?” He said a Swedish Christian came up to him one day and told him that he would meet Christ that day.

He said, “I was so shaken that I went back to my room and sat up all night. I lit candles and I waited to meet Christ. I fell asleep, but when morning came, nothing had happened. As I was sitting at the breakfast table, there was a knock at the door, and a Swedish Christian lady handed me a Persian New Testament.”

Samuel began to read it. He said, “Christ did come to meet me that day.” Before long he was leading that small group in Sweden.

God's Spirit is moving through the Iranian community, but the deep need is for balanced teaching of the truth. I thank God that Voice of Christ Media Ministries puts balanced, clear, biblical teaching on the air for the Iranian people.  It's a wonderful thing that God is doing and it's something that we should celebrate and get excited about. He is pouring out His Spirit upon Iranians and displaying His power.

God is building His Church

A third wonderful work that God is doing is that He is building His church in Iran. Jesus said, “I will build my church and the gates of hell will not prevail against it.”

Greg Livingstone, the founder of Frontiers, said, “The Iranian church is the most mature church among the Muslim people in the Muslim world today." This church has given up martyrs, including pastor Haik Hovsepian.

One of the things that amazes me is that the many little Iranian fellowships around the world have incredible connections to Iran. Reza was a new believer in our church.  His sister managed a bank in Tehran. She was very stressed and unhappy. So in Reza's letters to his sister he quoted the Scriptures. However, he did not say what he was quoting. He just put in verses.

His sister called and said, “You know, since you've gone to America, you've developed such an ability to write. I can't just read these letters of yours once. I take them out every day and read them. In fact, I'm reading them at the bank and everybody is gathering around at lunch time, and they are getting so much peace from your letters.”

Finally Reza had to tell her, “You know, I must confess, those are not my words, those are the words of Jesus.”

There was another man from our church who was a former professor at the University of Tehran. He became a Christian. After he was baptized he announced that he was going to go back to Iran to tell his colleagues the good news of Christ. His wife, who was still a Muslim, pleaded with him, “Don't go back. They'll kill you.”

He said, “If they kill me that would be a great honor. I'm going back to Iran.”

He hadn't been in Iran a month when he wrote me a long letter. He said, “Iran is a great place to talk about Jesus. People are far more interested here than in America. In fact, I have a discussion group with all my former colleagues, and already six of them have trusted Christ as Lord and Savior.”

I encourage you to pray daily for our brothers and sisters in Christ in Iran and for Voice of Christ Media Ministries. I encourage you to sense with me the importance of this moment and this window of opportunity that God has opened to us.

As the pressure upon Iranians is increasing, their hearts are more and more turning to the Lord Jesus Christ. May God bless you as you consider your role in prayer and support for this ministry.