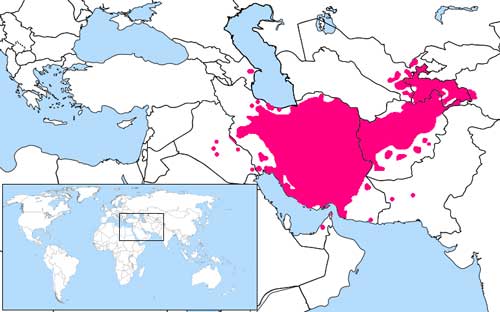 The term "Persians" refers to people who speak Persian as their mother tongue or who trace their ethnicity to the ancient Indo-European people called the Aryans who moved south from Central Asia around 1200 BC. The ancient Persians settled in what is now Iran and spread their language and culture from there.

Persia is frequently mentioned in the Bible. Four of the first kings of Persia -- Cyrus, Darius, Khashayarshah (Ahasureus) and Ardashir (Artaxerxes) -- are mentioned a number of times in the Old Testament. Iran, known as Persia in the Bible, is the land of the famous Bible people Esther and Daniel. The Bible also tells us that Persia was the nation God used to carry out His will and deliver the Jewish people from Babylonian captivity. Persia’s first monarch King Cyrus was the king who allowed this.

Here are some websites that offer general information about the Persian World. We are not responsible for the content of these sites.

Afghanistan and Its Culture - A detailed article explaining the history, culture and customs of Afghanistan.  Photos included

Etiquette, Customs, Culture, and Business of Afghanistan - A site focusing on Afghan culture and customs along with travel advice with a focus on business

Afghanistan for Kids - Information about Afghanistan especially for children and their parents and teachers. Maintained by a family that lived in Kabul

History through Persian Eyes - Professor Ali Ansari, one of the world's leading experts on Iran, gives an overview of Persian history. Included is a three-part series from BBC Radio exploring world history from a Persian perspective.

Farsinet – An Christian Iranian web site with pages in English and Persian. Some of the content is dated, but the site includes helpful information about Iranian churches and ministry resources for reaching out to Iranians.

Iran and Its Culture - A detailed article explaining the history, culture and customs of Iran.  Photos included.

The Culture of Iran - A collection of information about Iranian culture, history, holidays and religion

Persians in the Bible - A booklet explaining how Persia figures into biblical history and prophecy and how Bible customs are seen in the Persian culture. Available in English or Farsi as a free download.

Historical Iranian Sites and People - An interesting blog focusing on historial places, people and customs of Iran. Included are many excellent photos, some old and some new.

Iran in the Bible - Bible references to Persia and Persians

Persepolis and Ancient Iran - Research findings about the ruins of Persepolis in Iran by the Oriental Institute. Includes 999 photographs.

Tajikistan and Its Culture - A detailed article explaining the history, culture and customs of Tajikistan. Photos included.

Tajikistan: An Overview - General information and photos of Tajikistan