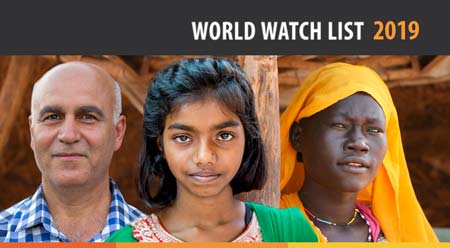 Open Doors International has published its 2019 World Watch List which shows the 50 countries where Christians are persecuted the most. In 40 of the 50 countries, persecution is rated extreme or very high. Afghanistan ranks second, and Iran ranks ninth in the list.

Explore the country profiles to find information, stories and prayers for each of the countries on the World Watch List, along with ways that you can stand with your persecuted church family in prayer and action.

The World Watch Monitor offers this commentary on this annual persecution list:

"It reports that new laws in China and Vietnam seek to control all expression of religion. It says that in China, it’s the worst religious repression there’s been in more than a decade; some even say since the Cultural Revolution ended in 1976. In the north and Middle Belt of Nigeria, meanwhile, at least 3,700 Christians were killed for their faith – almost double the number of a year ago (an estimated 2,000) – with villages completely abandoned by Christians forced to flee, as their armed attackers then move in to settle, with impunity. Nationalistic governments such as India and Myanmar continue to deny freedom of religion for their sizeable Christian minorities, sending the very clear message that to be Indian, one must be Hindu, or to be Burmese one must embrace Buddhism.

Extreme persecution also comes at the hands of radical Islamic militias, such as in Egypt – where the Islamic State in Sinai vowed in 2017 to ‘wipe out’ the Coptic Church – as well as in Libya, Somalia and many other sub-Saharan countries. South-east Asia has seen suicide bombers in Indonesia attack three churches in one day. In Mexico and Colombia, persecution mainly comes when church leaders challenge corruption and cartels.

But, globally, it also comes from family and friends, from fellow-villagers and work colleagues, from community councils and local government officials and from police and legal systems. Christian women and girls face more persecution pressure in family and social spheres; men and boys are more likely to experience the brunt of pressure from the authorities or militias.

In summary, Open Doors estimates that at least 245 million Christians experience ‘high’ levels of persecution in 73 countries – up from 215 million in 58 countries in the previous year."