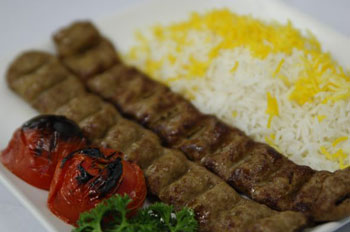 "Chelow Kebab" is the national dish of Iran and served throughout the country. This delicious meal consists of steamed basmati or Persian rice and broiled meat kebab.

Saffron and butter are traditionally served on top of the rice with grilled tomatoes on the side. "Somagh" (powdered sumac) can be sprinkled on the rice. A tradition of placing a raw egg yolk on top of the rice originated in northwestern Iran, although this is no longer common. In fact, unless specifically requested, most restaurants will not serve raw egg with the rice because of safety concerns surrounding the consumption of raw eggs.

There are two main varieties of kebab. "Kebab-e Barg" is barbecued fillets of beef tenderloin, lamb shank, or chicken, along with onions and olive oil. "Kebab Koobideh" is Iran’s signature kebab. It is made from ground lamb, beef or chicken mixed with chopped onions. Koobideh refers how the meat is prepared, originally placed on a flat stone and smashed with a wooden mallet.

Most kebab restaurants only serve these two varieties, and two skewers are always served. A combination of one skewer of barg and one koobideh is typically called a "soltani," meaning "for the sultan."

For a description of the various kinds of Iranian kebabs, including photos and receipes, see "Taste of Iran: A Complete Guide to the Iranian Kebab."