The fall of Afghanistan appears imminent, as Taliban forces regain the complete control over the country they lost two decades ago. While we don’t know for sure what the future will bring, we can be certain that Afghan Christians face grave danger in the days to come. 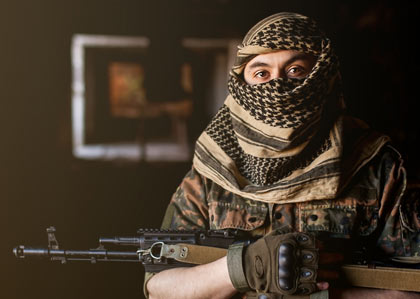 Even with the restraining force of a U.S. military presence, Afghanistan was listed by Open Doors as a land where “persecution is only very slightly less oppressive than in North Korea.” Christian converts face dire consequences if their new faith is discovered. As Open Doors notes, they either have to flee the country or they will be killed. “How we survive daily only God knows,” says one secret Afghan believer. “He knows because he has been kind to dwell with us. But we are tired of all the death around us.”

As U.S. troops rapidly exit the country, followers of Christ in Afghanistan will become even more exposed to persecution. Girls and women will also suffer, as will those who helped Western forces for the past 20 years. We need to diligently pray for these vulnerable populations, and ask that God will protect them from the suffering to come.

Christians in the West should pray for the spiritual provision of minister and missionaries in the country. “Every church leader who has emailed or texted me has asked that we would pray for the Lord to strengthen them in their faith—that they would ‘stay strong in the Lord, who is the Sovereign King,’ as one put it,” says Josh Manley.

We should also pray for those who are sick. As Open Doors points out, “Though underreported in international media, COVID-19 cases are spiking in the country and hospitals are limited in what they can offer. There is no certainty as to how the healthcare system will be able to sustain itself with the new Taliban government.” We must also pray that the fall of the state will not lead to more extremism and terrorism. “The Taliban’s swift advance can only embolden extremists,” says Paul Robinson of Release International.

But there is another group Jesus tells us we need to pray for—the Taliban.

“You have heard that it was said, ‘You shall love your neighbor and hate your enemy,’” Jesus said in the Sermon on the Mount. “But I say to you, Love your enemies and pray for those who persecute you, so that you may be sons of your Father who is in heaven” (Matt. 5:43).

When Jesus gave the command to love and pray for our enemies he knew it would one day require praying for Islamic extremist groups, like the Taliban, who murder his bride. Praying for the Taliban is not something we would choose. But it is what Jesus has commanded of us.

Here are three specific ways we can pray for those who would murder our Afghan brothers and sisters:

Pray for the conversion of the Taliban.

There are two primary reasons we don’t pray for the conversion of Islamic extremists like the Taliban. The first reason is that we believe it’s absurd to think they’ll become followers of Christ. The second reason is that we fear they might actually convert.

The first reason is more common, since praying the extremists will convert seems like a useless plea. We recognize the theological truth that God can do for them what he did for us: provide the gift of grace that they might be saved (Eph. 2:8). But we look at the situation “realistically” and tell ourselves that the probability of their genuine conversion is so close to zero that it would be a waste of our time—both ours and God’s—to even bother to ask.

No doubt such conversions are unlikely and rare. Yet we should pray for their conversion anyway. If we truly love our enemy, how could we not at least petition God to change their hearts?

Another, less frequent, reason we don’t pray for their conversion is that we fear they may actually repent. Like Jonah in the land of Nineveh, we want our enemies to receive their just desserts, not mercy and forgiveness.

For instance, during the Second World War, there were likely numerous Christians who dutifully followed Jesus’s command and prayed for the Nazis. Yet how would those prayer warriors have felt if they discovered that Hitler, in the moments before his death, had truly repented of his sins and was forgiven by God? Many would have felt cheated, as if it was unfair of God to forgive such horrific crimes. They would likely want to complain, as Jonah did when God spared the Ninevites, “I knew that you are a gracious and compassionate God, slow to anger and abounding in love, a God who relents from sending calamity” (Jonah 4:2)?

But it is precisely because he is a gracious and compassionate God that we ought to pray for the conversion of our enemies. How could we do anything less than ask God to show our enemies the same grace he showed us, when we were his enemies?

Pray the Taliban will be restrained from doing evil.

There is no dichotomy in praying for the good of our enemy and praying their evil actions will be restrained. It is for the good of the Taliban persecutors as well as to the Christians being persecuted that they be prevented from committing more evil. For those who have hardened their heart against God, it would be better that their life was shortened than for them to continue to persecute his children. As Jonathan Edwards says in a sermon on Matthew 5:22, people in hell would give the world to have committed just one less sin in this life.

For the past 20 years, the protection of innocents has required that human governments—including the United States—take military action to prevent the Taliban from persecuting the men, women, and children of Afghanistan. We were warranted in supporting the just use of force in restraining such evil, and we should pray that God will once again provide such a restraining force. Yet we should be careful about the motives for our request. While the death of the Taliban forces may be the only effective way to restrain the death and suffering they cause, we should not rejoice in their suffering or death (Prov. 24:17).

Just as we petition duly established governmental authorities to deliver earthly justice, we can petition our holy God to deliver divine justice. As John N. Day says, “[W]hereas love and blessing are the characteristic ethic of believers of both testaments, cursing and calling for divine vengeance are their extreme ethic and may be voiced in extreme circumstances, against hardened, deceitful, violent, immoral, unjust sinners.”

In asking that divine justice be done, we should be careful to guard our motives. Praying for divine justice can be a way to circumvent our duty to love our enemy. While we must leave vengeance to God, we must not forget what is commanded of us.

As Paul writes in Romans 12:19–21: Beloved, never avenge yourselves, but leave it to the wrath of God, for it is written, “Vengeance is mine, I will repay, says the Lord.” To the contrary, “if your enemy is hungry, feed him; if he is thirsty, give him something to drink; for by so doing you will heap burning coals on his head.” Do not be overcome by evil, but overcome evil with good.

In the order of our prayers, asking for divine justice should be included as the “last resort” option, a plea for doing what is necessary for those who will neither turn to God nor turn away from doing evil.

As former enemies of God, we should be gracious and grateful that we are allowed to pray for our enemies, secure in the knowledge that Jesus will hear our pleas. We should be thankful enough for the grace of God that we want even the Taliban to receive his mercy. But if they refuse and harden their hearts against the one who would spare them, then we must ask they receive the divine retribution due everyone apart from the righteousness of Christ.

This article by Joe Carter was published by The Gospel Coalition on August 16, 2021. https://www.thegospelcoalition.org/article/how-to-pray-for-the-taliban/  Joe Carter is an editor for The Gospel Coalition, author of The Life and Faith Field Guide for Parents, the editor of the NIV Lifehacks Bible, and coauthor of How to Argue Like Jesus: Learning Persuasion from History’s Greatest Communicator. He also serves as an associate pastor at McLean Bible Church in Arlington, Virginia. You can follow him on Twitter.