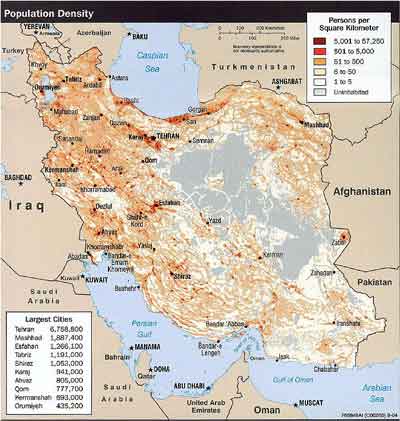 Press TV and Payvand News report that Iran's population grew by 4.7 percent in the past three years. We quote from their report:

"The Iranian government's main statistics agency has released updated demographic data for the country, saying the population grew by around 4.7 percent since the last census was carried three years ago to top 83.75 million in September 2019. A report published on Wednesday by the Statistical Center of Iran (SCI) showed that the Iranian population grew at a stable pace of one million people per year since 2016 when Iran's population was nearly 80 million.

Excerpts of the report covered by the IRIB News showed that an urbanization trend seen in Iran over the past decades was still a major case in the past three years as almost no increase was reported in the rural population in the country over the period. It showed that rural population in Iran in the summer of 2019 was the same as three years ago, around 21 million people and around a quarter of the total population. That comes as around half of Iran used to live in villages in 1979 when the Islamic Revolution took place in the country.

The SCI is a subsidiary of the Plan and Budget Organization of Iran, a government department directly controlled by the Iranian president. Reports and surveys by the SCI, including those monitoring economic indicators in Iran, are regarded as the most reliable for domestic and international agencies.

The statistics agency published its latest report on population growth in Iran to mark the Day of Statistics in the country. Nationwide censuses are conducted by the SCI every 10 years."