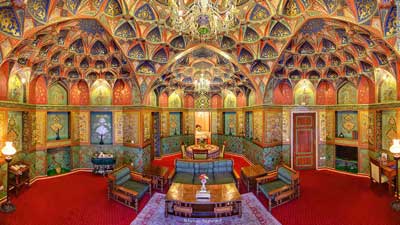 Flick through almost any travel magazine these days and you're bound to come across an article hailing Iran as the next big destination.

Prompting the spike in interest in the Islamic Republic is recent geopolitical wrangling in the shape of a nuclear deal with world powers that has ended some longstanding sanctions.

But while the country is trying to modernize its tourism industry in the face of increasing visitor numbers -- 5.2 million came in 2016 and more are expected in 2017 -- its more traditional offerings still have the potential to charm.

None more so than the Abbasi Hotel, an opulent if careworn establishment located in the ancient city of Esfahan. It's a place like no other.

Esfahan has its fair share of historical wonders (some which are UNESCO World Heritage sites), but in many ways the Abbasi has become a tourist attraction in its own right.

Built around 300 years ago, under the Safavid dynasty reign of Shah Sultan Husayn, it was originally used as a pit stop for merchants traveling the ancient Silk Road.

The complex provided shelter not only for traders but also for the camels and horses they used to help transport their goods.

The years, decades and centuries that followed took their toll on the old caravanserai (during the early 1900s it was used as a military complex) and it started to fall into disrepair. Read more in this fascinating CNN photo travel essay.