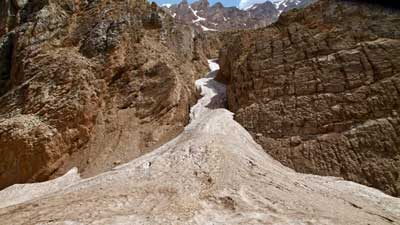 An icy glacier in the middle of a hot desert? It seems unlikely. But it's true.

In the Zard-Kuh, a 4,200m-high mountain range bordering the western flank of Iran's vast central deserts, hides one of the Iran's most unexpected geographical finds. On the edge of the hot desert are a series of sub-tropical glaciers.

Ian Lloyd Neubauer went to see it for himself. While he was there, he came across the Bakhtiari, a nomadic tribe who camp near the glaciers to escape the stifling summer heat. They spend eight months a year in Khuzestan, a province in the south of Iran, and migrate to the Zard-Kuh at the end of every April to escape summer temperatures that soar to 50 C. They remain here until mid-September, fattening up their livestock on fresh green grass.

Read all about it in this photo essay by Ian Lloyd Neubauer that was published on the BBC travel site.