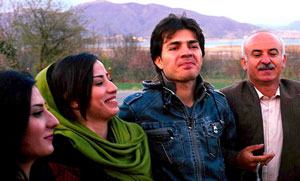 "On the western edge of Iran, Kurdistan province makes up part of a broader Kurdish region, which also spans adjacent sections of Iraq, Syria and Turkey.

Over the border in Iraq, the territory has been targeted by the Islamic militant group known as ISIS, but Iranian Kurdistan remains unaffected, a peaceful world away from the violence.

It also seems a world away from Iran.

Although we're still within Iran's borders, the Kurdistan region is quite different, and more traditionally Persian compared to the country's heartland.

Culturally and linguistically, the residents here have more in common with their fellow Kurds across the border than with Iranians from Tehran, Esfahan or Shiraz.

Dress is traditional: men sport baggy shalwar trousers, plain shirts and heavy felt waistcoats, while the women wear colorful dresses and headscarves rather than the black chador or hijab seen throughout much of the rest of Iran."

So writes Adam Chidell about his visit to Kurdistan province in western Iran. His story and the photos that accompany the article are a fascinating look into a lesser-known part of Iran. Recommended reading.