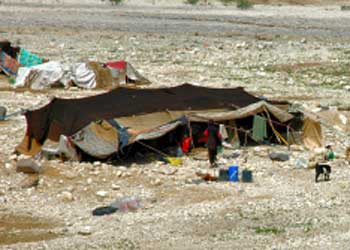 When the desert heat begins to fire up in April, the Bakhtiari nomads of Iran pack up and start a long journey – women and kids on horseback, men on foot, belongings in tow, sheep trailing behind – for the cooler regions in the Zagros mountains of southwestern Iran (highest peak nearly 15,000 feet).

In the fall, as a chill wind blows in, they will make the reverse trip to the high plateau pastures more than a hundred miles to the south. They will cross flood-swollen rivers and mountain passes to move to better grazing lands for their goats and sheep. And when they stop they will resume housekeeping in hand-made black goats’ hair tents.

The Bakhtiari tribe, which numbers around 800,000, inhabits an area of approximately 25,000 square miles that straddles the central Zagros Mountains of western Iran.

Their migration is among the most spectacular known among nomads anywhere. They cross mountain passes at about 10,000 feet and therefore have to time their movement carefully in order to minimize the danger of early snowfalls or flooding mountain rivers.

Children from the early age of 9 or 10 work on the hills with the livestock. They come down for milking and for meals of tea, flat bread and yogurt. Women work hard at milking, doing the laborious dairy work by hand, hauling firewood, baking bread twice daily and fetching water from the springs in goatskins loaded onto donkeys.

Many Bakhtiari have been persuaded to settle in towns but those who are still living as nomads are hardy people. Even in the more permanent settlements, there is usually no electricity or running water. Nomads have reported that it takes 250 sheep to fully support one family. Though Farsi is their language of commerce, they speak Bakhtiari at home. And yes, they have cell phones. One third of nomadic homes have a mobile phone.

"This is our destiny – to follow a migratory lifestyle,” says one clan head.  “Personally, I'm proud of it.  I don't like to live in a house where there is a ceiling.  It's suffocating to me.”