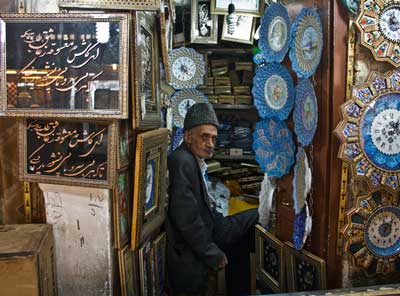 When you go to the bazaar in any Iranian city as a kid, you will hear this sentence a thousand times. Even during the daytime it can be dark inside the covered bazaar where people are constantly elbowing each other to squeeze through the narrow corridors. The vendors shout loudly to advertise their goods and get people's attention while porters yell out "Ya Allah, Ya Allah" (My dear God) to open the way for their heavy carts.

Experiencing a Persian bazaar is like meeting a gigantic, loutish, and ravenous monster with thousands of mouths capable of wolfing down the river of people in its path. Yet despite this chaos, bazaars in Iran have their own kind of exquisiteness, magic and charm. As soon as one passes through its main corridors, small picturesque and calm timche and saray - the merchants’ storehouses or resting places – come into sight.

So wrote Changiz M. Varzi, a freelance journalist and photographer about his visit to several bazaars in Iran. Bazaars in Iran are fascinating places. It's where you see Persian culture up close. Varzi's fascinating article includes photos showing life as it really is in the passageways of the bazaar.