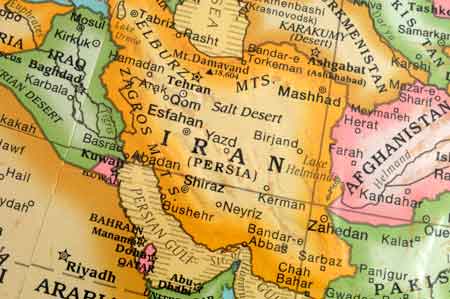 Iran is a beautiful land in many ways.  It lies between the Caspian Sea in the north and the Persian Gulf in the south. A large central plateau is surrounded on three sides by impressive mountain ranges. The Great Desert in the center of the country occupies an area as large as France.

Iran’s climate varies considerably. Winters are cold with heavy snow in the northwest and in the mountains. Spring and fall can be mild in much of the country, but summers are hot and dry. In the south, winters are mild and the summers are very hot. The area along the Caspian Sea coast is subtropical.

Iran has a rich history going back thousands of years.  It and the Iranian people are frequently mentioned in the Bible.  Iran was known as Persia until 1935. It gets its name from the Aryans who were ancient settlers of the land. Since 1980, the official name of the country has been the Islamic Republic of Iran.

Throughout history, Iranians have made many contributions to art and science. They pioneered many techniques still used in medicine and surgery today and made important discoveries in astronomy and mathematics. Iranians generally are very friendly and hospitable.

Shi'a Islam is the state religion and most Iranians profess to be Muslims. However, millions are spiritual seekers. In fact, rarely in history has there been such an encouraging responsiveness to the Gospel in a Muslim country as now exists in Iran.

Although the vast majority still hasn’t heard the life-changing message of Jesus Christ, many of their hearts are open and seeking.

Other information about Iran:

Iran and Its Culture