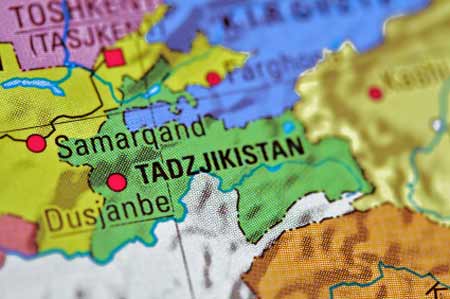 Tajikistan is a small republic in Central Asia, bordering Uzbekistan, Kyrgyzstan, China and Afghanistan. Most of its land area is mountainous. The climate consists of hot summers and mild winters in the lower elevations while the Pamir Mountains are semi-arid to polar.

Of the Central Asia republics, Tajikistan was probably the least prepared for independence from the Soviet Union. Since 1991, it has gone through three changes in government and more than a decade of bloody civil war. Over fifty thousand were killed and as many as one million were made refugees. Poverty and severe hardship are now common. 83% of the population lives under the poverty line.

The most commonly spoken language today is Tajiki, not Russian. Tajiki is a Persian dialect similar to the Farsi that is spoken in Iran and Dari that is spoken in Afghanistan. However, Russian is still widely used and understood, especially in the capital Dushanbe. A quarter of the population speaks Uzbek.

Although 90 percent of the Tajiks profess to be Muslim, only a small percentage faithfully practices their religion. Most are more influenced by superstition or Zoroastrian beliefs.

For almost 1,000 years there was no significant Gospel outreach to the Tajiks.  Now there are more than 1,000 Christian believers in Tajikistan and many others around the world. God is at work among the Tajiks. But there is still great need for the Gospel to spread across this land and for indigenous churches to be planted.

Other information about Tajikistan: